In the heart of Frankfurt am Main, the museum presents, preserves, communicates and researches the archaeology and history of the city and its surroundings from the Stone Age to the early modern age. The collections include regional and urban historical finds as well as important collections from the Old Orient and Classical Antiquity of the Mediterranean. 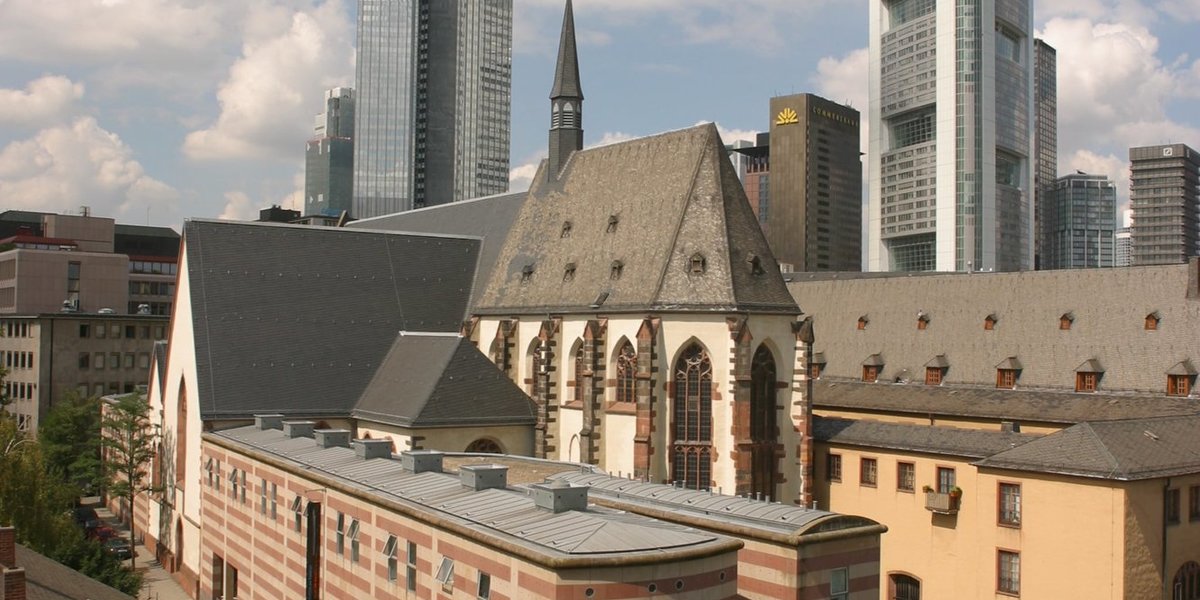 The museum moved to the Gothic Carmelite Church, which was rebuilt by Josef Paul Kleihues and extended by a museum annex. ©Archaeological Museum Frankfurt/Uwe Dettmar 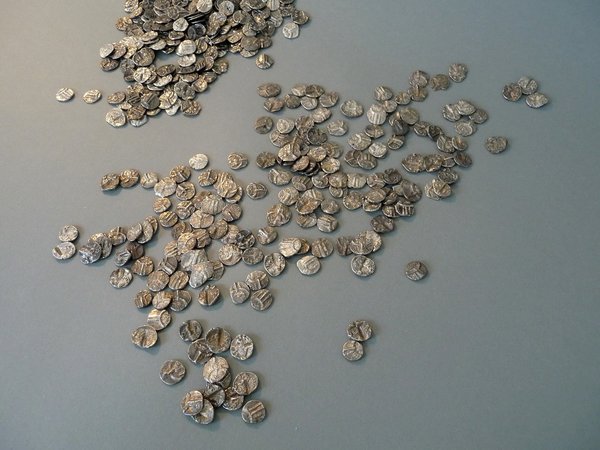 The "Heidetränk" oppidum is characteristic for the younger part of the Iron Age. The late Celtic site lies northwest of Frankfurt am Main on the southern edge of the Eastern Taunus. The first archaeological research was carried out at the end of the 19th century by Christian Ludwig Thomas (1848-1913), a Frankfurt architect and building surveyor. The coins that were minted in the oppidum - under Mediterranean influence - today make up an important part of the museum's Iron Age collection. A coin treasure, consisting of 349 silver coins, dates from the middle of the 1st century B.C. and was recovered by looters near the oppidum. Another highlight of the exhibition are the Latène period grave finds from the region. Among them are elaborately decorated jewellery such as the ornamental combs with horse handle from Frankfurt-Praunheim, which show us the unique craftsmanship and enigmatic imaginary worlds of a fascinating culture.

Archaeological finds bear witness to times gone by - whether they date from the Stone Age, Antiquity, Roman times or the Middle Ages! Young people in schools and in their leisure time can learn about Frankfurt's history on dedicated guided tours. The focus is always on original objects, some of which date back thousands of years. The offer is rounded off by various workshops, which stimulate the creativity of the participants. In addition to special events such as the Museumsuferfest or the Museum Night, educational programmes and guided tours of the temporary exhibitions are offered. The Museum Night is a highlight of the year for many Frankfurt residents, both young and old. 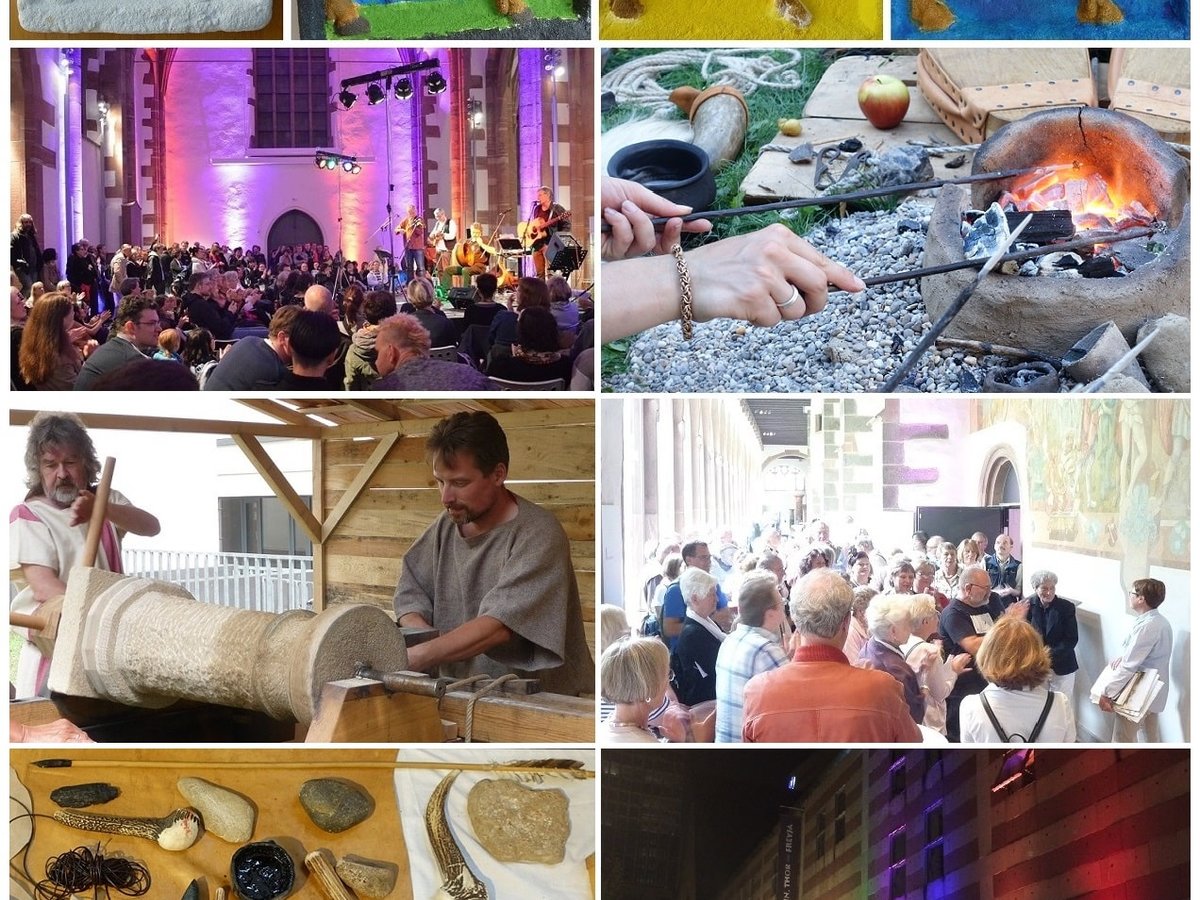 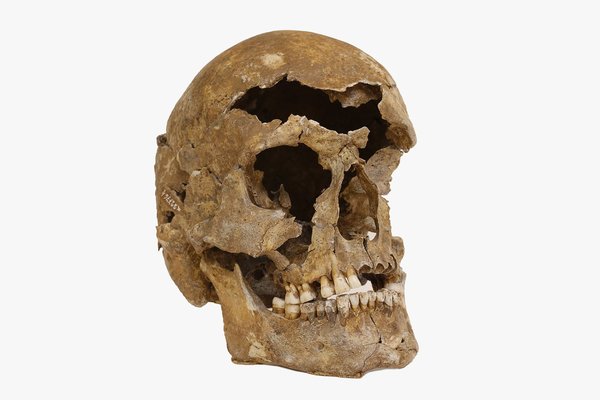 One of the museum's most important Iron Age ensembles is the aristocratic tomb dated around 700 BC, which was discovered in the Frankfurt city forest. This complex represents one of the oldest known burials of the early Celtic elite, 150 years older than the famous tomb of the "Prince of Hochdorf" and 250 years older than that of the "Prince of Glauberg". The tomb was originally located under an artificial mound and surrounded by more than 50 others. Under the direction of the Archaeological Museum, it has been investigated again since 2016 on the occasion of the 50th anniversary of the excavation as part of an interdisciplinary research project. In addition to the analysis of funerary goods, the aim is to answer unanswered questions about the eating habits of the person buried, his geographical origin and possible movements during his life, as well as his genetic position in the European population and his physiognomy. To this end, the skeleton is examined using a tomograph and analyses (DNA, nitrogen/carbon ratio, strontium and oxygen isotopes). A forensic facial reconstruction is also planned. 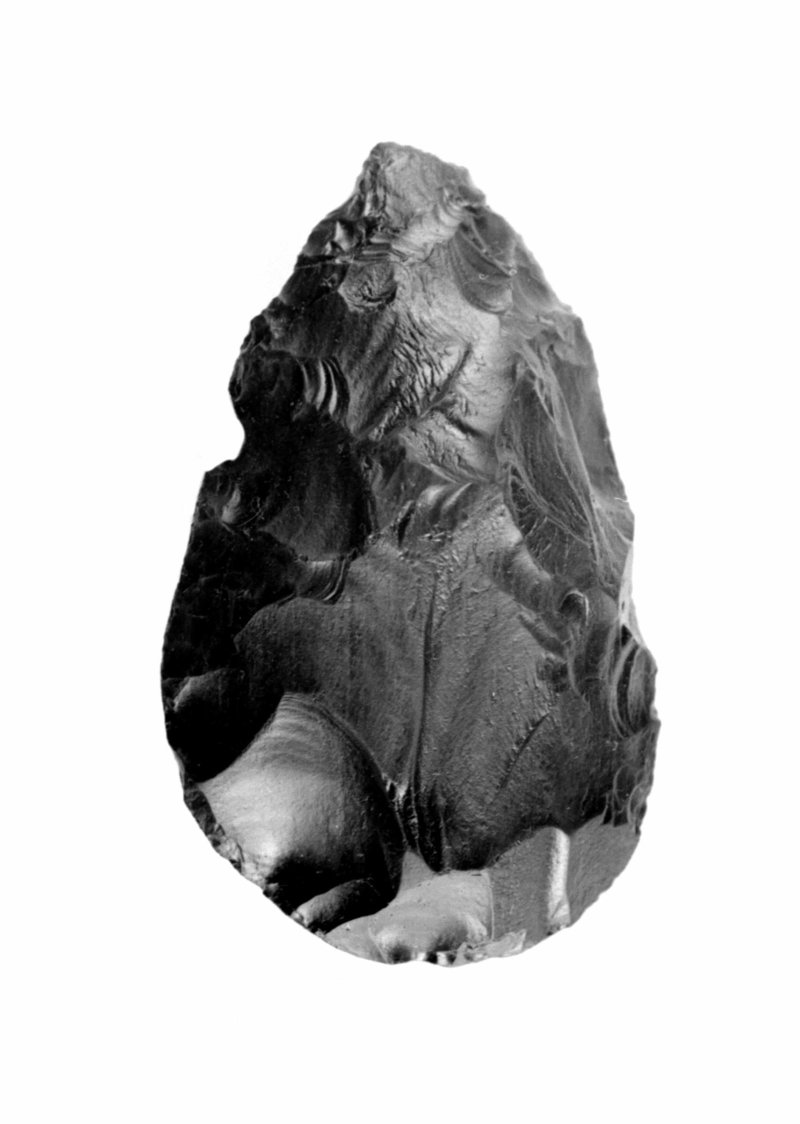 The Frankfurt am Main-Bergen-Enkheim biface was used as a tool by a human being about 200,000 years ago and is today the oldest find in the Archaeological Museum. This characteristic tool with its round base, opposing tip and carefully crafted two sides was a versatile tool that could be used for cutting as well as for scraping, drilling or striking. © Archaeological Museum Frankfurt 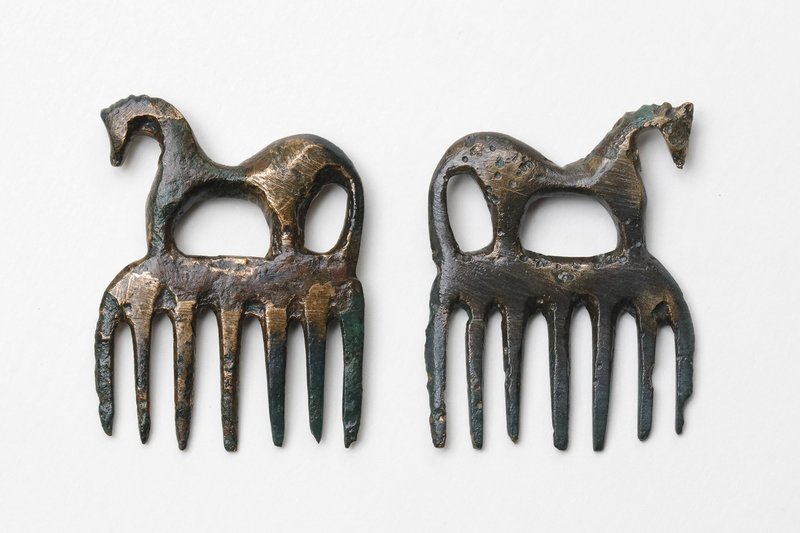 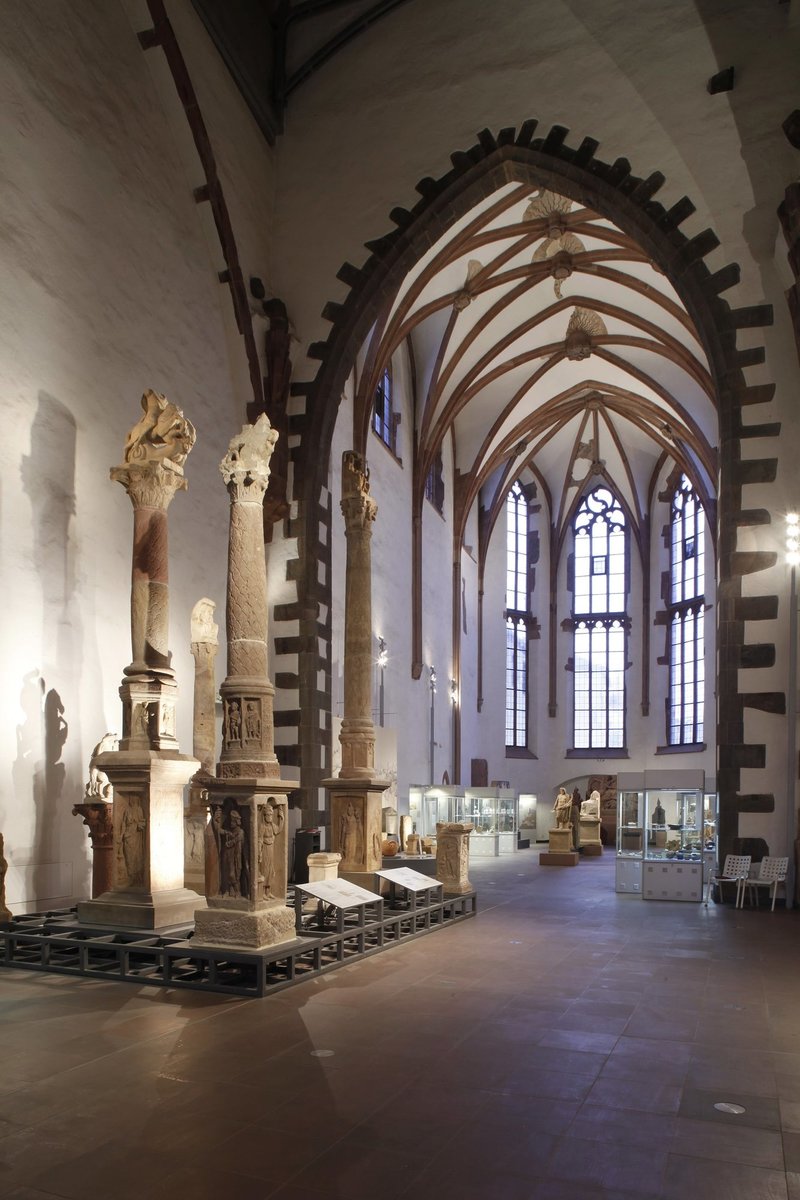 The highlights of the collection for the Roman period are Roman helmets from the 1st and 3rd centuries, votive reliefs from places of worship of the god Mithra and several columns bearing a representation of Jupiter. Many of the remarkable objects come from the Roman town site of Nida in what is now Frankfurt-Heddernheim. Frankfurt Archaeological Museum / Uwe Dettmar

Classical Antiquity and the Ancient Orient

The core of the collection of Classical Antiquity and the Ancient East consists of ceramic tableware from the Mediterranean area and its surroundings - Asia Minor, Greece, Italy, Spain, North Africa, Anatolia and Syria. The objects from Iran, in particular, represent one of the largest collections of this origin in Germany. © Frankfurt Archaeological Museum 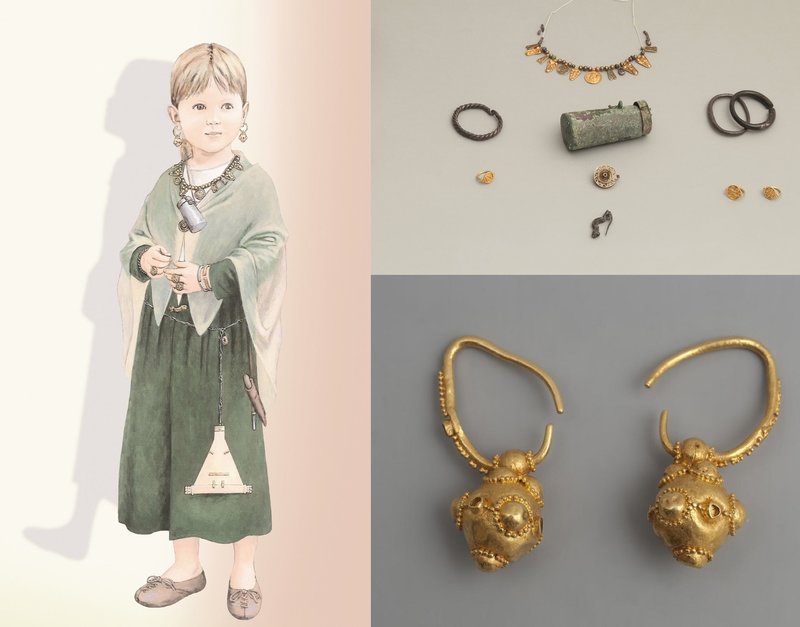 In 1992, extensive excavations in the Imperial Cathedral of St. Bartholomew's in Frankfurt revealed a tomb dating from the early Middle Ages and housing two children associated with a rich burial furnishings. One was found with precious jewellery, textile remains, an ivory amulet and other valuables, the other with a ceramic pot and bear claws. © Frankfurt Archaeological Museum 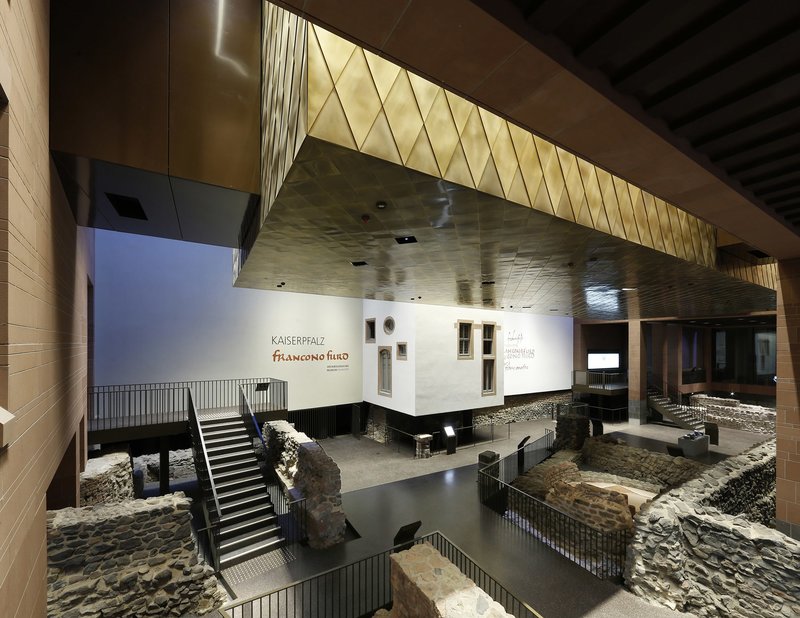 Since 2018, the Archaeological Museum has been presenting an archaeological park on Cathedral Hill dedicated to the oldest preserved building remains in Frankfurt. These include a Roman bath, the walls of the Carolingian royal palace, and cellars from the late Middle Ages - traces of around 2,000 years of urban history. © Frankfurt Archaeological Museum / Uwe Dettmar