The "Sacré Mormont!" exhibition will be held at the Bibracte Museum (France) in 2022, then in Lausanne (Switzerland) in 2023 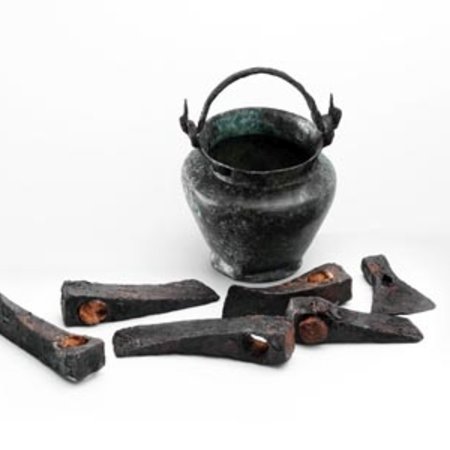 The Mormont site was discovered in 2006 during limestone quarrying work and is regularly excavated as the quarry is extended. It has already yielded more than 200 pits dug into the rock, containing assemblages of objects that are quite exceptional, both in terms of the quality of the objects, which are representative of the material culture at the turn of the 2nd and 1st centuries BC, and in terms of the singular nature of these assemblages and their unusual location, on a seemingly inhospitable edge of the plateau.

Since it cannot be attached to any of the categories of sites usually recognised by archaeologists, Mormont is certainly neither a settlement nor a necropolis. Nevertheless, we find a large number of remains of meal reliefs, almost all the types of objects attested at the end of the 2nd century BC - with the notable exception of weapons - as well as human remains, whole bodies buried in the ground or incomplete bodies bearing obvious traces of handling. A large number of pits contained prestige objects, metal crockery, ornaments, others tools and objects attesting to metallurgical practices, others still millstones, ceramics that had been deliberately broken, etc.

The density of the pits, their distribution, the quality of the objects deposited, the arrangement of the soil used to backfill the pits after the deposits, all demonstrate a very reasoned management of the space, and a very singular practice of ritual deposits of objects, over a short period of time, at most one or two decades.

How can these deposits be interpreted? Which population is at the origin of them? Why was such a place chosen? Why invest it for such a short time? According to what rhythms, what modalities, to respond to what motivations or necessities?

The teams of the Cantonal Museum of Archaeology and History in Lausanne (canton of Vaud) and the Bibracte Museum are joining forces to retrace the archaeological investigation devoted to this unusual site, through an exhibition that will be presented at Bibracte in 2022, and then in Lausanne on the occasion of the Afeaf (French Association for the Study of the Iron Age) symposium to be held there in May 2023.

At a time when the Mormont hill is at the heart of a social debate about its future and the preservation of its natural and landscaped environment, which is threatened by the extension of the quarry, the exhibition will return to its enigmatic archaeological heritage, which has also been the subject of much publicity. Without claiming to provide clear-cut answers to the many questions raised by these discoveries, questions that are still being debated within the scientific community, the exhibition will bring together the main clues collected on the site and will deliver the provisional results of the different scientific approaches mobilised around the site, almost all the approaches that can be mobilised by the archaeologist at the beginning of the 21st century. All in all, the exhibition aims to show, by means of this spectacular and unique dossier, what means of investigation 21st century archaeologists can mobilise and with what artifices they elaborate a narrative to give an account of a distant past that has left us no written trace.